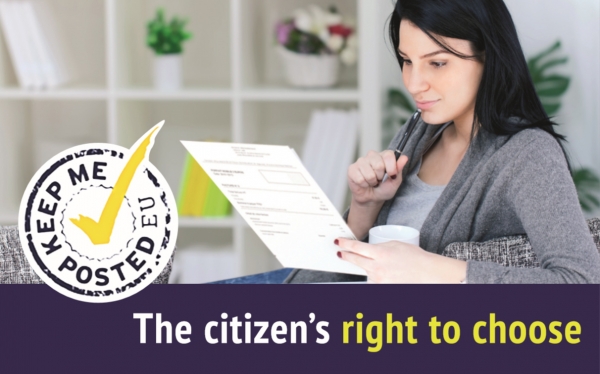 Intergraf is an active member of the Keep Me Posted EU campaign. This campaign promotes European citizens’ right to choose how they receive important information such as tax forms, election documents and bills and statements from service providers without experiencing any disadvantages. Keep Me Posted EU is not anti-digital; it is pro-choice. It also aims to promote the inclusion of vulnerable consumers in society, who for many different reasons may sometimes not be able to receive digital communications.

As well as this European campaign (which targets the European Union institutions), there are also a growing number of national Keep Me Posted campaigns across Europe. The first campaign was initiated in the UK, with all following campaigns inspired by this one.

At European level, KMPEU gathers the support of consumer groups and charities that represent citizens who may be disadvantaged by a lack of choice, or simply do not agree to switch to digital communications. Keep Me Posted EU is supported by over 25 European organisations, representing a wide variety of sectors and interests, such as consumers, trade unions, older people, persons with disabilities, carers and industry. In the European Parliament, the campaign has also received a lot of backing, with over 50 MEPs pledging their support during the 2014-2019 legislature. Political activity in the Parliament has included the submission by MEPs of a Parliamentary Question for Written Answer to the European Commission, as well as the inclusion of a reference to the KMPEU campaign in an Own Initiative Report (INI) on the application of the Postal Services Directive (2016/2010(INI)). Keep Me Posted EU's political activity towards the Commission includes contacting high-level Commission officials and monitoring dossiers relating to consumer rights, online/distance sales of goods, digital government and financial services.

Following the 2019 European elections, the Keep Me Posted EU campaign will continue to protect the citizen's right to choose between paper and digital communications.

Watch the video below or visit the Keep Me Posted EU website (www.keepmepostedeu.org) for more information.